Korean Kids Song Sunday: Korean Alphabet to the tune of Doe a Dear

Most American children grow up learning the same ABC song (which incidentally has the same tune as Twinkle Twinkle Little Star).   I don't know what is considered the most popular Korean alphabet song (가나다송), but there are a few on you-tube, some which are more simple, some more complex and some with a catchy tune and others that I can't seem to follow.

One of the more complex and fun Korean alphabet songs is this one to the tune of Doe a Deer (from Sound of Music....I love this musical!):

There are free and paid versions of both the iphone app and the ipad app.  The free version allows all the games, matching, writing exercises, etc for only ㄱ ㄴ ㄷ.

In honor of our Thanksgiving holiday I thought I would leave you with a joke/pun. In order to understand it you need to know that 까불다 (ggah-bool-dah) means to mess around. 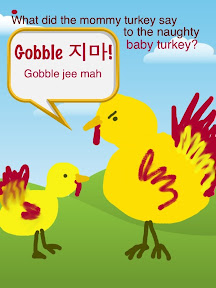 Posted using BlogPress from my iPad
Posted by konglishmomtobe at 12:30 AM No comments:

In the news - Apps for kids: Tools or Trouble?

As I'm enjoying reading the news on my new iPad (after downloading some fun Korean ipad games), I came across this article from the Washington Post: Kids Apps explode on smartphones and tablet.  But are they good for your children.

The entire article along with a few of the comments are a good read, but here are some tidbits:


Experts estimate that tens of thousands of kid apps are offered on Apple and Google Android devices, with titles such as BabyPlayFace and Elmo’s Birthday.  That worries some educators and child-development experts who view the flood of baby and toddler apps with trepidation. They warn that children already spend too much time in front of TVs, DVD players and computers. For children 2 or younger, all those screens can have a negative effect on development, according to a recent statement by theAmerican Academy of Pediatrics. If you really want to help boost brain power, the best solutions can be found with unstructured play, the academy said .

I've mentioned my concerns on this blog that I worry our kids get too much screen time - too much computer, DVD, movies, TV shows, iphone, ipad, etc.  At the same time, we're preparing to make a DVD recording for our daughter so she can see our faces and hear our voices while we are waiting to bring her home from Korea.

Oh, and by the way, BabyPlayFace (as mentioned in the article) is a cute app and it comes in Korean.  The app allows your child to poke the baby in its face, which it will wiggle then say the term in the language you select.  There are about 7 features: eyes, forehead, hair, ear, cheek, nose, mouth, chin.  And you can select the baby face that looks Asian.

A few comments regarding ipad/iphone apps:
Posted by konglishmomtobe at 3:55 PM 3 comments:

I started this blog earlier this year with the hope of containing and organizing my growing personal interest in teaching our future children to be somewhat multilingual.  Being still child-less? child-free, I knew I'd have a bit more time and the necessity of a hobby of sorts to get me through this wait until Baby came home.  We are in the process of adopting our first child from Korea.  We hope she'll come home to us next year.  So, besides my obsession with all things Korean kids, I'm also obsessing over all things Korean adoption.

One of the first bloggers that I read who was Korean-American adopting from Korea was Grace at Chois-R-Us.  Her fun writing style and her oh-so-cute son are positively addicting.  She passed on this neat little blog award to me.  And I'm going to pass it on.  Thanks G!

The Liebster Award spotlights up and coming bloggers who generally have less than 200 followers. Upon receipt of the Liebster Award, there are a few very simple rules:
1. Copy and paste the award on your blog
2. Thank the giver and link back to the blogger who gave it to you
3. Reveal your top 5 picks and let them know by leaving a comment on their blog.
4. Hope that your followers will spread the love to other bloggers.


Top 5 Picks (in no particular order, and probably breaking the under 200 followers rules since I don't really know how many they have)
1) The Korean Way - Korean cultural resources for adoptive families by an adoptive family
2) For These Children I Have Prayed - A fellow adoptive mom who knows pretty much everything Korean adoption and is a very eager Korean-language learner herself.  If I ever have a question about Korean adoption...she's my go-to gal.
3) On Becoming a Good Korean (Feminist) Wife -  This blogger may be the exact "opposite" of me: She's Canadian-Korean, I'm Korean-American; she's fertile, I'm not; she's pantheistic or monotheistic (not sure what that means), I'm an evangelical Christian; etc.  I find her insights and experiences fascinating and I'm sure you will too.
4) Bringing Home Mercy - This fellow Korean-American family share about the joys and challenges of bringing home their 2nd adopted child from Korea.
5) Near His Heart - This Asian-American family is being stretched as they grow their family through adoption.  It is obvious that they are growing near the heart of God as they bring their girl home from China next year.

Posted by konglishmomtobe at 10:15 PM 3 comments:

Email ThisBlogThis!Share to TwitterShare to FacebookShare to Pinterest
Labels: blogging

Yup. That's right. Now I'm downloading iPad apps too because the Husband bequeathed me one for our 6th anniversary!

So I'm taking this baby for a test run. First thing I did was to search for Korean kids iPad apps. What fun!

For parents without the iPhone or iPad, I commend you. These gadgets are amazing time and attention suckers of children. Besides having food and a good nap, I know a 18 month old who would be perfectly content to be playing with either one. As a parent to be, I do fear the amount of screen time our kids will get, but the fun learning and interactive enjoyment of these gadgets is phenomenal.

Take for example this app: Baby School.
This free version is great, but once the little one comes home next year I would buy the paid version. 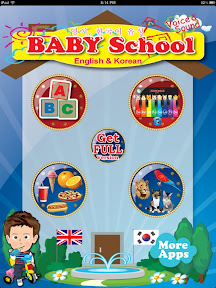 I'm guessing by the British flag that the developers of this app are from Hong Kong (big assumption made here), so they call the airplane an "aeroplane." They translated the materials to be available in Korean, Chinese, Cantonese, and Japanese. I believe they have free and paid versions of each of the languages.  I may need to download them all.

The free app has 4 sections:
1) The ABC section (fun and interactive, but not useful in teaching Korean. Now if it was the hangul alphabet, that would be awesome!!)
2) Baby Piano (actually quite fun! They have a separate paid and free Baby Piano app too)
3) Foods
4) Animals 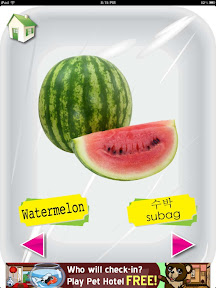 The food section says the item in English and In Korean. It gives the handful and the romanization (unfortunately the romanization isn't very clear as watermelon is pronounced su-bahk not subag. The pear is also incorrectly pronounced. 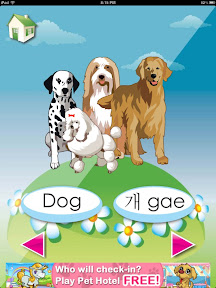 The awesomest section is the animals. Tapping the icon will give you the English, Korean AND a recording of the animal sound! What kid would not enjoy that!!! 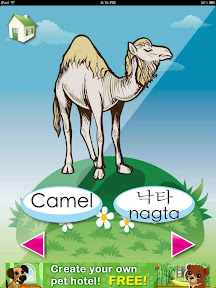 I will be following their blog to see what other apps they will develop:

To download the app, do a search for app creative or Baby School.

So the consensus is that the iPad is awesome and why does it seem that my iPhone just shrank! I do believe I have been ruined.

Posted using BlogPress from my iPad
Posted by konglishmomtobe at 9:06 PM 1 comment:

Every once in a while, I will do an App search for "Korean" or "아이" "우아" "동요" "동화" to see what apps have been newly released.  I'm pretty sure I have most of the free ones and a few of the paid ones.  I'm a klepto like that, but Husband doesn't protest since they're FREE!!!  This is what my "Korean page" of my iphone looked like once upon a time.  I think it's overflowed onto a second page now. 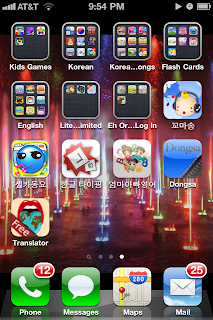 Interestingly, this blog is the landing page for people searching for the cute Korean Number Song (숫자송) which I translated here.  Well, if you want to be able to listen to that song along with the other cute comic songs  (엽기송) that are on you-tube and yahoo!kids Korea.....download this free app: 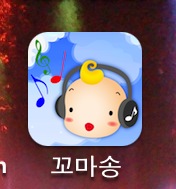 There are no bells and whistles.  It's just a music player.  But it's got the carrot song, number song, milk song, health song, rice grain song, cucumber song, etc.

You can play the songs while using another application.  Did I mention its free?  Really can't complain about that.

It's good listening for the shower. 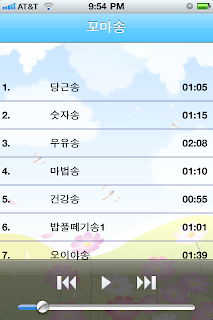 Posted by konglishmomtobe at 1:05 AM 6 comments:

I don't think that Pororo the Little Penguin needs an introduction.  But, just in case...Pororo is one of the most popular children's cartoon in Asia.  Pororo began as a Korean creation but has expanded and is translated in multiple languages and is shown in over 80 countries.   Kids love Pororo!!!
Any Korean grocery store here in the states is going to carry Pororo merchandise for kids and any Korean video store will likely carry pirated versions of the DVD series (with or without subtitles).

Pororos theme song was the first song in a CD block of 100 Korean kids songs that I borrowed.  Pororo is crazy popular.  I wonder if there was a loveability contest between Pororo and Elmo, who would win?


Lyrics in English:
Hey! It's Pororo
I love to play all day
Come join me all my friends
Always happy,
as can be Little Penguin, Pororo

Snow covered wonderland
Make way for Pororo
Always happy, as can be
Everyday a new adventure waits for me

I recently found this bilingual Toddlers Bible at my local Korean bookstore.  Unfortunately, I cannot find the publisher nor the book online.  Found it online here.  I wonder if larger Korean churches with "bookstores" would also have a copy.  The Bible was shrink wrapped but I think I chose a good one.
If you see it and want a great Bible to read to your toddler...buy it!  Here's why I think it would be perfect for me and our future child:


I look forward to establishing a bedtime routine of reading the Bible (Husband reads in English, me in Korean), singing a song about God and saying a few prayers in Korean and in English.


Maybe it's because I haven't been in school in a while, but I keep wanting to take Talk to Me in Korean's Quizzes (THE best Korean language learning website, by the way).  This one was on Konglish terms.  Konglish tends to mean the creation of Korean words based on the English term.  For example, 주스 (joo-seu) is juice and 포크 (poh-keu) is fork.  These konglish terms were a lot more difficult to guess because it's more "contemporary" terms like digital camera.  Camera is "cam-a-ra' but I just learned that digital camera is "di-ca."  The Korean language is so crazy sometimes.
I copied and pasted my answers below: