Husband and I had a GREAT weekend.  It was full of learning about adoption, meeting new friends, hanging out with old friends and seeing family.  What could be better?  Adding a bit of shopping!! After lunch on Saturday with our new friends at a Korean restaurant, Husband and I went to a Korean bookstore since we were in K-town.  It was quite overwhelming and for the first time I felt greatly grateful that we had so many Korean language resources so available to us.  I guess I have taken for granted the proximity of our Korean grocery stores and restaurants.

I could have spent hours browsing and trying to read the kiddie books and taking photos, but we didn't have too much time.  I bought 2 things that I thought were helpful to us now as Husband is learning Korean and for our very young Korean-learner who won't be able to use or read them for awhile, but the pictures are great!  One of the criteria for my selection of which book to buy is whether or not I can and want to read it. I read Korean at a Kindergarten level.  So, if it's cute and pretty and it catches my attention, I'll take it.  And if I can read it without my eyes glazing over with soooo many Korean words, I like it.  One of the things I bought was this Korean picture book like an "ABC book" for han-gul letters.  The publisher is Samsung books. 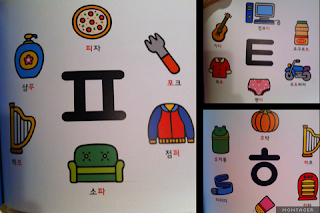 The book goes through all the Hangul consonants showing in full color pictures, an animal, food, vehicle, clothing or other common thing that starts with that consonant or has that consonant sound in the word.  I didn't notice too many at the beginning of the alphabet, but towards the end of the book, many of the words were Kong-lish words. For example, for the P sounds, every word was Konglish:

pizza, poh-keu (fork), jum-puh (jumper/jacket), so-pa (sofa), hah-peu (harp) and shahm-poo (shampoo).  I thought that maybe this was a Korean-English book that was trying to be bilingual, but actually I think that the Korean vocabulary just has A LOT of borrowed english words. But, the Koreans have sometimes butchered transliterated? Korean-ized the word so much, it's really almost unrecognizable.  I obviously greatly enjoy these Konglish words and find them quite hilarious.  The Koreans were not so creative in making up their own words, especially for clothing, foods, instruments and animals.  But it makes for really easy learning of Korean vocab.
Wifebeater/tank top?  Luhn-ning-shu-che.  That's right....running shirt.  Sandwich?  Just like it sounds: sehn-deu-wee-chee.  Wrench? That's a puzzling one.  Seu-peh-nuh = spinner? oh...cuz it spins the bolt.

Posted by konglishmomtobe at 10:09 PM No comments: