Husband and I are continuing to work through the consonants, but meanwhile, we have slowly introduced some of the Korean vowels.  I was trying to find a song/graphic/video that would help remind him of the geometric and orderly nature of the Korean vowels and their sounds. This youtube video is somewhat helpful.

The instructor sings the vowels to the tune of a hymn (can't put my finger on which one...I can vaguely recall some of the words in Korean...I'll have to ask my mom), demonstrating the direction of the written form of the vowel with her arms.

In the video, the instructor wants to sing the song "duh bbal-lee" - more faster.  A student asks whether it's "P or B" (pal-ee or bal-ee)?  The teacher deflects this question and says she'll explain later (bc it's actually a BB).  Anyway, this is an example of the distinctions of sound that seem troublesome to the husband.  d or t? g or k? p or b? j or ch? Of course, to me the distinction is recognizable, but to the non-native Korean speaker, yes honey,  "It's complicated."  We'll work on it. =)

[At this point, I am realizing that it would be helpful if I learned how to load the Korean-language onto my laptop so that I could actually type out these characters, but I haven't reached that level of tech-savy yet.  But I bet it's really easy to do on the Ipad 2! hint! hint! wink!]
Posted by konglishmomtobe at 12:39 AM No comments: 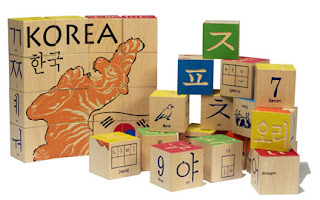 Pacifer's blog has been holding giveaways for these Hangul blocks (reg. $39 on their website).  I just missed the March one, but maybe they'll hold another giveaway.  I will continue to stalk them until I can finnagle a set for our home.  From the pictures, this set of blocks looks truly Korean-American with words in English and Korean.  I love how the letters are pretty clear and crisp, and they even include some of the complex han-gul vowels and consonants.  And if you look closely, there's even a dead-cow block for encouraging our family love of burgers and steak (it's actually an upside down cow, but you would have thought the same thing, right? just me? ok.)

Besides the blocks, the website has lots of other very fun baby/kid stuff that I'm fond of ogling at.
Posted by konglishmomtobe at 11:07 PM No comments:

One of the questions on our Family and Personal Questionnaire was:


How do you plan to include the culture and traditions of the country you have chosen in your family life?

As I typed out my answer, I became to realize how important it was to me to pass on Korean language, familiarity and love of Korean food, and other traditions to our child.  I realized that if our kids were going to learn Korean, we would BOTH need to be able to speak it at home.  So, I informed Husband that he was going to learn Korean.  He has always said he would learn (especially before we got married) and has always said that he wants our kids to speak Korean, Mandarin (he speaks Canto) and Spanish [ambitious, I know].....at minimum.

I scoured the internet for lessons on learning Korean.  Ok, I looked mostly at you-tube. But I wasn't impressed (actualy, most of them were really annoying and even incorrect).  The Korean language is phonetic, with the alphabet representing corresponding sounds, like English.  14 consonants and 10 vowels.  I told Husband, it's so simple! He growled at asked me to not to downplay the complexity of learning a new language.  He requested flash cards; so I made him these:

In my internet search, I found that Korean alphabet charts on the market use images of words that begin with that letter - like A is for APPLE.  For example, the first letter, giyok, that makes a g or k sound has a picture of a bear for gom, which is great for native Korean speakers.  But since Husband doesn't know very many Korean words, I knew I had to get a bit creative.  Husband knows the Korean word for bus, it's "buh-se"; goal is "gol"; and coffee cup is "kuh-pee kuh-pe".  So, you get the picture.  And he gets it too!  Yay for Konglish!
(He said that I need to patent these cards and sell them. Really?)

I was hoping that he could go through these cards a few times and these images would be burned into his mind.  And it worked!  We cycled through the cards a few times, and then I tested him using the first vowel of the Korean alphabet.  He was reading!  My Chinese-American husband could read Korean!!  ga, na, da, la, ma, ba, sa, ah, ja, cha, ka, ta, pa, ha.  My magic cards brilliant husband!!

However, we soon realized that learning these consonants actually take practice.  Husband got a little disappointed today when I pointed out a few Korean letters on a package and he couldn't recall them, without hints.  I said it was the font that messed him up.  We just have to keep practicing!  Vowel are a bit more challenging...coming up next.
Posted by konglishmomtobe at 11:47 PM No comments: